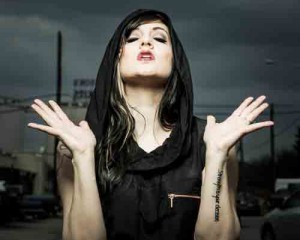 Garnering the attention and support of The New York Times with her performance at SXSW in 2012, she used this national spotlight to tour throughout Texas that year and the Midwest the following year. Frye once again found success through her fans when her debut LP, Obsidian, was crowd sourced through Kickstarter. Following the release of this record, The Wall Street Journal ran a review of album cut, “Dear,” saying, “A sturdy beat from drummer Chad Ford anchors the song, and guitarist Jordan Martin adds a sweeping, overdriven riff that Frye adorns with piano lines and vocals that build from an understated murmur to booming recriminations.”

She has opened for bands such as Beck, Chvrches, Pat Benatar, The Avett Brothers and Joan As Police Woman—though that is only a short list of artists with whom she’s shared a stage. Her energetic live shows and penchant for musical inclusivity also earned her the top spot in a fan-voted contest to see who would open 2014’s Edgefest 24 in Frisco, TX . But Frye isn’t simply rehashing the past onstage; she is currently in the process of writing and recording new material, which will find her mining the same heartfelt and emotionally absorbing territory that fans have come to expect from the ferocious singer.